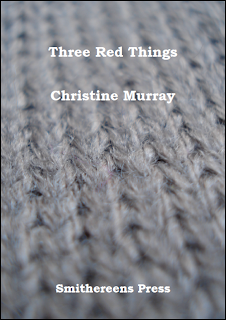 
is a 20-page chapbook lush in language. Its opening passage sets the tone:

Roadlake rushes to pours
its pools onto the pathways.
Mercury-mirrors dot them
imaging the trees’ dark sway.

This is not a simple scene. In fact, it is actually driven more by alliteration — r-r, p-p-p, m-m, d-d — than its imagistic aspects. The image itself is partially mirrored, and Murray is intently aware that she is indeed engaged in the act of “imaging” in the poem. Moreover, the verb form is deliberately skewed in the first line — shouldn’t it be “rushes to pour” instead of “rushes to pours”? Clearly, this is not merely about a leisurely drive on a country road, but also about poetry and modes of expression. Oh, and what about the portmanteau of “roadlake”? In eight letters we have the whole idea of a body of water flooding itself onto what humans had wished to be circumscribed as separate from nature. And what about “Mercury”? This too could be laden with meaning.

You can perform this kind of textual analysis all through Murray’s work with equally fruitful outcomes. One section I particularly like is “reed songs I-IV,” set at Trá an Dóilín in the Conamara town of An Cheathrú Rua. Trá an Dóilín is a coral beach that is often also covered in maerl (reddish seaweed/algae). A beautiful spot. Here, the colors of the beach in one section merge into the colors of a horse in another:

amongst the strife the orange flame

the yellow strife
the white

white grey and cream : her
mane and tail is against the wall

There are so many ways to read this; it suggests something about oppression, specifically in the gendering of those involved. Also running through it are themes relating to the muse in poetry, music (“your double-flute’s song”), the Famine, and the “noise” of mannered civilization.

Perhaps reminiscent in theme (not form) of Carol Ann Duffy’s “Standing Female Nude,” “The Zeiss” reiterates Murray’s feminist stance in its turning of the tables on “the male gaze,” the Zeiss being a brand of medical lenses:

the primitive Zeiss dilated
with the mathematical implements of your pornographies : meters,
lenses

all these rotated in your skull-disc, and I
spread wide as cut-fruit onto a plate-fallen

dilated
and captured you.
I wondered which of your screens I was playing on?

“Playing on” as in being screened, but more so in the way that the poet “plays on” the features of language, wordplay. It is the speaker who accordingly seizes power in this scenario.

The title poem, “Three Red Things,” is noteworthy for its employment of crisp imagist details as a platform over which to assert a more personal, subjective position in the world. The speaker is located up against a tree: “its roots are moving beneath my feet / I am afraid it will tear up from the / soil’s hungry drinking as” — and that’s it. As what? Do we need to know? No, we don’t. Murray’s poetry doesn’t owe us tidy answers. We’ve got the “soil’s hungry drinking as” and it’s a great phrase and a great ending just as it is. 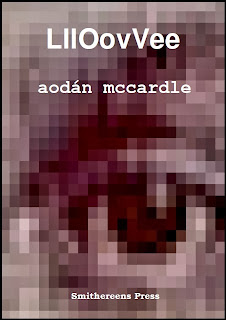 McCardle’s bio note explains that he “practices improvisational Performance Writing, making particular use of the physical body of writing,” and this work is indeed emphasized as a kind of performance. I can see it. I like that McCardle has actually incorporated a number of his notebook pages, reproduced photographically, that play alongside and against the typeset sections. His handwriting sometimes spells out readable words and other times devolves into a kind of scribble, but with the trace of the physical movement of the pen paramount. It is a record, a graphing of instantaneity never to be repeated.


Having thus preserved it through the wonders of technology, McCardle adds other layers. For example, a handwritten column of the repeated word “now” is juxtaposed with a column of the repeated typeset word “then.” Simple, that, yes. But it is only one small part of a process of repetition with variation and stripping down of words in order to reveal something about the ways in which and the reasons why we utilize language. The chapbook begins with a long typeset passage that wrangles with questions such as

Given the nature of the form LllOovVee takes, it is something that should really be engaged with on its own terms, as the full effect is not captured in this review. But I will say that one possible answer to the questions set out above seems to be located in the title itself, a transcription of a common English-language word that McCardle has sloppily scribbled and strewn across several notebook pages with increasingly emphatic flourishes. It demands to be experienced as much as analyzed. 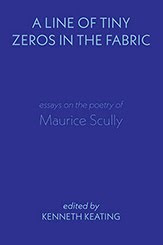