2 Poems in An Sionnach 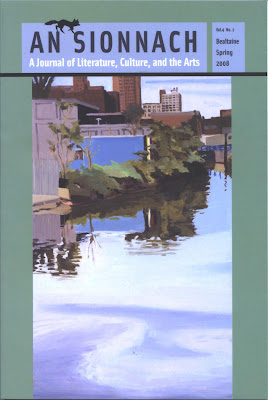 I have two poems in the new issue (4.1) of An Sionnach: A Journal of Literature, Culture, and the Arts (which is an Irish Studies journal published by Creighton University). They are entitled “Samhain” and “Grab the Polaroid.”

“Samhain” is something of a long poem — four-and-a-half pages as printed here.

There is a lot of other worthwhile material here as well, from the painting on the cover of the Gowanus Canal, Brooklyn, by the Irish and American painter Elizabeth O’Reilly (click above for the large view), to the poems of dual-language poet Gréagóir Ó Dúill, to James Liddy’s review of Kevin Kiely’s biography of Francis Stuart, and much in between.

This one is worth buying.

An Sionnach is published twice yearly, in Spring (Bealtaine) and Fall (Samhain). A yearly subscription includes two numbers of the journal.

An Sionnach is distributed by University of Nebraska Press.

To request more information, email the editor at: editor@an-sionnach.com 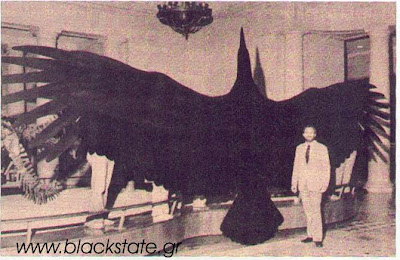 The new issue of Blackbird is out, number 9, which contains poems and artwork, with a particular emphasis on mail-art and collage. Editor David Stone (a considerable poet in his own right) collects some very interesting artists from all over the world — Serbia, the US, to Japan, to Finland, and on. Many of the poems and artworks actually use the blackbird as symbol or subject, but not all. This is a quite unique publication. And I have two poems in it myself.

Posted by Mike Begnal at 1:24 PM No comments:

Ancestor Worship has been reviewed in the latest issue (Vol. 28, No. 1, Fall 2008) of The Irish Literary Supplement, a review of Irish and Irish-related books published by the Irish Studies program of Boston College. For those somehow unable to obtain a copy, I reproduce the piece, which appears on page 24 of the issue, below.

I received my copy of Ancestor Worship from Begnal in a darkened poetry bar in Manhattan. The publisher, Salmon, was celebrating the release of its new collection, and while grey-haired Irishmen read sentimental verse following Begnal’s opening recitation of his own, sharper poetry, a steady bass began to insinuate itself between lines and stanzas as the dance club next door swung into the full flush of its evening business. It was a curious and funny experience: a quaint syncretism made more striking by the culturally-assumed dischord between its notes. I left not only with a smirk at the gag (and a smile at the reminder that poetry need not always exist only in hushed and proper coffee houses or raucous slam halls), but with this modest-seeming little monograph in my back pocket.

Weeks later, when the memory of the bass had faded, and the Irishmen had all returned home, I was pleased to finally crack it open during a lull in my academic and editorial responsibilities. I found it well-designed as a book of poetry ought to be, in its off-white pages and inauspicious formatting, a sophisticated minimalism pointedly refusing to distract from the thoughtfully ascetic poems it contains. This pleasant reserve finds itself expressed in those poems as well, though its “pleasantness” is only for the reader. By contrast, the protagonist of these pieces is often mournful, self-mocking, rueful, melancholy. These blue emotions mimic and are mimicked by the landscape of Galway, its inhabitants, its visitors. Beautiful, novel images underpinned by clever rhythms appear and fade, their poignancy lingering with the reader as the poem seems to cast them about like so much chaff — it is a rich verse that can so carelessly treat its heirlooms, but these are the hallmarks of an experienced poet who knows better than to grandstand.

In terms that seem both accessible and exotic to American ears, Ancestor Worship is an attempt at reconstructing an obscured heritage, imagining it in the roads and rivers and shops and people of a land both foreign and familiar. Over the course of its roughly three-dozen poems, Begnal drafts an Irish ancestry through its traces in the present in Galway, in its politics and its nationalism, in its decrepitudes and triumphs. And yet, there is an American-ness to it as well, in its trans-Atlantic focus, in its tourists, in its references to the U.S. as other, outside, used-up, in its desire to root in an ambiguous space of something that is not-as-it-once-was. It is this ambivalent, and yet searching, tone that dominates. These poems are sometimes fleshy, sometimes cerebral. Both are managed eloquently, and their intermixing keeps either from being superfluous or daunting. Some are coyly self-conscious, displaying an ironic distance from the materiality they describe and inhabit. It is this irony, verging on self-parody, that allows the poems to stand as more than mere musings. Instead, they represent a consciousness prudently wary of the false promises of both American and Irish culture as it is manipulated by those who vehemently claim them.

Especially in “Madrileños” (for obvious reasons), but elsewhere as well, there are undertones of The Sun Also Rises and its desire to find more durable significance beneath the attractive veneer of dazzling images and irreverent adventures in which it revels. This, again, is its ambivalence, its cynicism and faith. In this way, it goes beyond those poets who flaunt their rebellion, their outsider status, their drug use, their drinking, their philandering, or, conversely, those who drown in the flood of their credulity, obsessed with metaphysical “truths” they see behind every surface and in the face of every old woman they meet. Ancestor Worship, rather, sees its hero entwined in a mesh of contradictory threads, some leading to transgression (of law, morality, fidelity), others to recuperation (in knowledge, pleasure, genealogy); this balanced voicing reflects a developed perspective that makes few promises, but convincingly keeps those it does.

Still sometimes (“My Role in Society”) it is quaint, quizzical, laughing at and with itself, positively upbeat and lighthearted. It is here that it comes close to euphony, with beats and syllables coinciding, sounds more prevalent, more evident. Even in these moments, so hard to pull off for otherwise-cerebral poets, AW manages to seem unaffected and still meaningful, reasserting the fact that no-one and no search, however vital to its hero’s identity, is entirely morose or entirely serious. There is also, even in more somber poems, the realization that the philosophy of aestheticism, the position of the aesthete (as he is referred to in “From Great Height”) is hamstrung by its solipsism, by its tendency towards self-aggrandizing.

And then, there is sometimes a blending, rather than ambivalence, recognition of a new hybrid space, rather than an inability to choose one state over another. This is “There’s No Present,” a bodily philosophy in a present-past. This poem bears the simultaneity of Begnal’s cult of ancestry, reminding us that it is not only time, but form that submits to this new mode, a mode subtly salted between images and rhythms, rather than declared, paraded, humiliated on ostentatious display. These poems fulfill double functions (or myriad), then, too. They are simultaneously atmospheric and metaphysical, and, here and there wary of metaphysics or longing for its exhausted promises, they cover all ground, creating the jumble of cross currents that send the protagonist’s boat adrift on his journey from and to America and Ireland.

“Ancestor Worship,” its pivotal and titular piece, deserves special notice for its striking insight, certainly something meriting the subtly transformed attention it receives in the pieces that surround it. It is traipsed across by departed icons treated philosophically, rather than elegiacally, inserted into a stream of cultural figures stretching its long fingers into the sedimentary rock of human existence. It is also aware, in a Historical Materialist sense, of the use of the past by the present, of history’s weight always being a relative burden. It is a poem with relevance in the now for our treatment of the “then” (and of the “them”).

It has its weak moments as well, of course, moments that are slightly indulgent, or that lose direction (ironically, this is never the case for the longer ones, and its presence in short poems is a sort of accomplishment, perhaps — in some cases, it decidedly is: just as questioning is the ambivalence of faith, so wandering is the ambivalence of homes). There is, perhaps, also an absence of the otherwise-effective critical self-reflection in the derisive stance some poems take towards the American tourists who appear from time to time (“shorts-wearers,” they’re called). Their foreign-ness could act as a foil for Begnal’s own imperfect belonging, and yet, affinity is rejected in favor of a somewhat-exhausted derogation of the bourgeois.

The arrangement of the monograph is strategically adroit, and manages these less sympathetic moments well. Front-loaded, the book’s more striking imagistic pieces and the more startling insights occur in the beginning, taking hold of the reader and encouraging him to be generous. Afterwards, though the themes of ancestry and ambivalence remain strong, their development coherent throughout, the book seems to limp along for a bit late, then recover itself to finish with whispers of thunder both achingly doubtful and bitterly confident (“New Year’s Day 1999” and “Another Exile”).

There are six in Irish, a pleasure for those who can read it, or for those who simply find significance in its presence, or even those who are forced because of its foreign-ness to learn to read around the words, read all the materiality of the page that falls silent behind sentences. Still, I have to admit I cheated. Begnal was gracious enough to answer my query with English translations, which equaled the others, but on which I will reserve the majority of my commentary for the appreciation of the above-mentioned pleasures.

The Irish poems and the exclusion their inclusion suggests (both the exclusion of the non-fluent reader and the exclusion of the Irish language from Irish culture their presence protests against) remind the reader that language and its use is always an act of affiliation, and that it can never be apolitical. That being said, the content of the poems themselves traverses the same thematic ground as the other poems: geography and the body as expressions of cultural belonging or the failure of it. These poems tend to linger in cold shadows or under grey skies, however, and the almost-cheery self-mockery that pokes its head in some of the English poems is entirely absent. Rather, they are mournful. Not dreary, but melancholy.

These poems, then, offer a new paradigm of heritage as a function of place, of body, of language. Interwoven as the tangled sinews of belonging grappling with history and dispersal, the threads of Ancestor Worship tie a complex knot. But it is a knot that binds us, ties us to our families and homelands. Moving forward from the unmoored civil society of the twentieth century, this gnarled and ambivalent filiation is incredibly timely, and Begnal’s poetry makes a fit vessel for it.