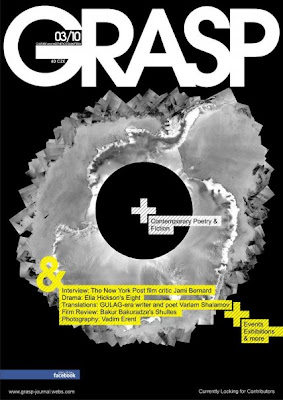 I am happy to have a poem in the new issue (#3, Spring) of GRASP, which is an English-language literary and arts magazine published in Prague. If you live in that city, you can find it in the book shops. But for those who don’t, you can easily download the .pdf of the whole issue by going here (it’s your choice of the large or small file). A couple quick clicks, and there you have it....

The poetry section of this magazine is really very good, I have to say. Other contributors include Alan Jude Moore, Carrie Etter, Louis Armand, Heather Fowler, Sheila E. Murphy, and more, along with prose fiction, essays, photography, film reviews, etc. Very much worth the look. Further information can be found at the GRASP website.
Posted by Mike Begnal at 4:11 PM 1 comment: 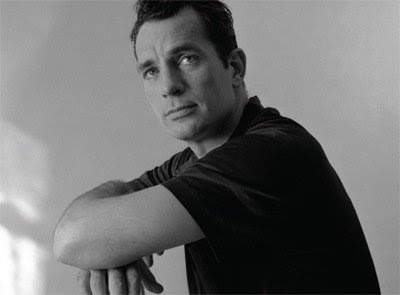 It’s interesting to remind oneself that Jack Kerouac’s native language was Massachusetts-Québec French. In the recently (2007) discovered manuscript of Kerouac’s aborted 1951 autobiographical novel La nuit est ma femme, he writes, «Je suis Canadien Français, mis au monde à New England. Quand j’fâché j’sacre souvent en français. Quand j’rêve j’rêve souvent en français. Quand je braille j’braille toujours en français.» Following the online article of the newspaper where I first read about it, Le Devoir (5 septembre 2007), there are a number of comments, one of which (Lucien Francoeur) says, «le style révolutionnaire d’écriture pratiqué dans On the road n’est pas possible en français.... Kerouac...n’aurait pas été cet écrivain mondial s’il avait écrit en français ou en québécois.» While I can read a good amount of French, Kerouac’s dialect often tends to elude me, so I suppose I can’t say with any certainty based on this work whether or not he would have been as global (mondial) a writer in French as he became in English. Something rings true, though, about Francoeur’s comment, as much as I also assume the French work itself has got to be good — the reality is English has supplanted French as the dominant world language (with attendant pros and cons). In any case, all of this does highlight the double language consciousness that permeated Kerouac’s world-view and allows speculation about how much this could have informed his more well-known work in English. And certainly it must have been partly responsible for the way in which he situated himself in and against Anglo-American society.

To my mind, Kerouac remains one of the greatest novelists of the 20th century. To me, he stands up there with Joyce, Nabokov, Faulkner, Djuna Barnes, Flann O’Brien, Thomas Pynchon, Lawrence Durrell — of course this is a subjective list. Joyce’s influence on Kerouac’s work has been well documented by now. But it’s interesting to note that Kerouac praised Lolita: “Just read Nabokov’s Lolita which is one of the classics of world literature and ranks with Joyce, Proust, Mann and Genet in the divine solipsism of modern literature...My opinion of him, earlier formed by critics, was low...and so there you have our marvelously competent American critics” (Letter to Lawrence Ferlinghetti, June 15, 1962). Although these two writers were different in many regards, I like that Kerouac liked Nabokov. I have not been able to find out if this admiration was reciprocated in any way. Also noteworthy: Nabokov too began life speaking a language that was not the language he would become famous in as a writer.

For me Kerouac’s greatness lies not only in On the Road (though certainly it is located there), but also in works like Visions of Cody — a radical reinterpretation of the same On the Road material, his most experimental work, and probably his masterpiece. He was at the height of his powers when he wrote Cody, and the level of perception conveyed there is completely amazing. Reading the two books as in a way different versions of each other creates a further layer of insight, a sort of metafictional (Kerouac would no doubt hate me using that word to describe him) layer that exists in between the two. As well as that, in Cody Kerouac employs certain techniques that would now have to called postmodern — non-linear narrative, incorporation of tape-recorded conversations, drawings, references to writing itself (“...old Yeats will butler, he really was a cunt man that old Irish sod I love him and dig him, why paterson Williams the carlos poet, so carlos he makes a shroud out of a mill....”), the filmic, linguistic experiment after Finnegans Wake (including passages in French). It’s his most ambitious work, his greatest. Tim Hunt writes a lot about it in Kerouac’s Crooked Road: Development of a Fiction (1981). 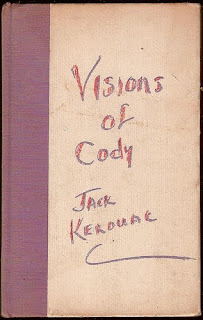 I would further say that Doctor Sax and Maggie Cassidy are two more of Kerouac’s great novels. And that Mexico City Blues, Pomes All Sizes, “San Francisco Blues,” and others are among the best works of a certain school of mid-century American poetry, in the line of Williams Carlos Williams. However, there are other descendents of Williams, representatives of other schools, to whom Kerouac, the Beats, the San Francisco Renaissance poets and so forth did not seem like such a good thing. I’m thinking here of George Oppen (who I also like immensely, in a different way than I like Kerouac), who, in his essay “The Mind’s Own Place” (1963), sets up Beat writing (though he doesn’t specify it by name) as opposed to the imagist precision of the original flush of modernism: “Such an art [i.e. the modernist “skill of accuracy, of precision”] has always to be defended against a furious and bitter Bohemia whose passion it is to assist, in the highest of high spirits, at the razing of that art which is the last intrusion on an onanism which they believe to be artistic. In these circles is elaborated a mock-admiration of the artist as a sort of super-annuated infant...”

As much as I like and admire Oppen’s writing, I think his criticism here only serves to highlight a schism in poetry which still exists today — what I might term the schism between the “scientific” (as exemplified by Oppen and other Objectivist poets) and the “artistic” (a word which Oppen clearly uses pejoratively in his essay when linking it to the Bohemian). Both of these schools of American poetry, these poetic modes of being, however, can justifiably claim descent from Williams himself. Yet Kerouac, with his Beat associations, is seen by many as merely an ultra-Bohemian, “the King of the Beats,” drinking himself to death but not producing much of literary value — at best perhaps the spearhead of a fad with some sociological value, but more usually as someone who helped usher in the worst kind of confessional nonsense. In comments like Oppen’s, I hear the echoes of Truman Capote saying of Kerouac, “That’s not writing, it’s typing.” I am reminded of conservative critic Norman Podhoretz’s assertion that Kerouac’s motto was “Kill the intellectuals who can talk coherently....” Kerouac’s own champions oftentimes don’t do much to dispel these misconceptions. In a review of Kerouac’s posthumously published play Beat Generation (2005), I criticized A. M. Homes’ bombastic introduction for characterizing Kerouac’s style as “a literary atom bomb smashing everything,” as “everything and the kitchen sink too,” “a kind of demolition derby pileup.” Where Oppen means his portrayal of “a furious and bitter Bohemia” as an attack, Homes means her comments as complimentary! In my opinion, they are both wrong.

Kerouac was dedicated to the craft of writing. That is the first thing. His aesthetic is ultimately a matter of personal taste, a subjective thing. That he exhibited certain Bohemian tendencies, ultimately drinking himself to death, is neither here nor there, except inasmuch as it helps illuminate an evolution from life-affirmation to nihilism. I think that Oppen’s criticisms in “The Mind’s Own Place” are based more on his own subjective tastes in literature, and possibly the circumstances of his own life history. Oppen has decided that he does not want to lead a life of excess, and that is fair enough. But it seems to me that those who make a virtue out of criticizing those who may fall into the “Bohemian” camp usually do so because of their aversion to that sort of lifestyle, rather than on literary merit. Would they dismiss Rimbaud too? Should the artist be any less valorized than the carpenter? I find it wholly possible to embrace both Jack Kerouac and George Oppen, and the different kind of poetics they represent. 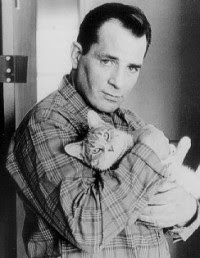 But I disagree that Kerouac, for example, lacks precision. If he seems to at times, it is in actuality part of a wider strategy. As Gerald Nicosia writes in his biography of Kerouac, Memory Babe (1983), in regard to prosody, “His one real advance beyond Williams was the apprehension that rhythm develops within the thought process rather than being created by thought. Albeit the distinction is subtle. Kerouac really was moving toward a more spontaneous literary form, one in which errors, malapropisms, babble, and all forms of verbal stumbling fit into a grander context.” Kerouac embraces irrationality as a method when it is called for. Some cannot embrace the irrational, for whatever reason their lives have set before them — another aspect of the aforementioned schism.

Interestingly, William Carlos Williams himself championed Beat Bohemianism, lauding Allen Ginsberg by including his letters in Books Four and Five of Paterson and writing in a March 11, 1952, letter to Robert Lowell that Ginsberg “is coming to personify the place [Paterson] for me” (qtd. in Paul Mariani, William Carlos Williams: A New World Naked, 1981). Ginsberg seems to recapitulate in slightly wilder form what Williams himself has been asserting throughout the whole course of his epic poem, that “unless there is / a new mind there cannot be a new / line....” Ginsberg personifies the figure of the artist that Williams posits in Paterson, the future American poet who has finally broken free from old ways of thinking and writing, one who is freed from conventional morality. In 1957, Williams met with Ginsberg, Kerouac, Gregory Corso, and Peter Orlovsky, and Nicosia notes that Williams “praised their writings.” Of course, Williams’ association with Oppen through the Objectivist Press and so forth implies praise for Oppen and his style of writing as well. There need be no mutual exclusivity here.

No, we would not be having this conversation if Kerouac had primarily written in his regional dialect of Québécois French. As it happens, though, he is considered by many as one of the greatest American novelists and poets of the 20th century because of his writing in English. That status is deserved — not particularly because of the literary movement he was associated with or its remaining appeal to those who do not identify with the dull monotony of established forms, both in literature specifically or in society more generally (though I will say there is even some merit in that). Instead it is deserved because of the particular works which he himself wrote, which are brilliant whether or not you take into consideration the particular arguments surrounding them in his time or ours. Jack Kerouac’s birthday is March 12. He would have been 88. At the risk of outing myself as a Bohemian, I raise my glass to him.
Posted by Mike Begnal at 10:33 PM 3 comments: