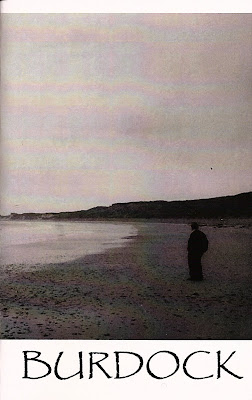 There’s a new issue of the Milwaukee-based journal, Burdock. Burdock 5 is something of an unofficial tribute to James Liddy, who recently died. Editor Keith Gaustad’s photo of James on an Irish beach (“Poet looking on the Irish sea”) graces the cover and makes for an auspicious if bittersweet start. Page one is a short remembrance of James by Keith, and an exchange of notes between them in preparation for the magazine launch and reading which eventually took place at Woodland Pattern, unfortunately without James.

Page two is Liddy’s remembrance of John Ashbery (still alive), incidents of a life which become first representative and then mythical. It made me think of James’ unique style of storytelling and ultimately of his poetry, and that I miss him. Take another drink.

I’m included here, along with Jim Chapson, Tyler Farrell, Paul Vogel, Shannon Ward, to mention a few others who initially caught my eye. Tim Miller’s got some excerpts from his ongoing Roman history series. As always, and original to Burdock, some of the poems are rendered on sticker paper. I’d like to know if anyone ever sticks these poems in other places. There are some short prose pieces here too, though I rarely read new prose in journals with the same attention as I do poetry. Probably a flaw on my part. I liked Thomas Kovacich’s abstract nude on the inside back cover. It reminds me of something I can’t quite remember.

Contact this very cool journal Burdock: burdockmagazine@gmail.com, and/or click the first link above for further info on the internet. 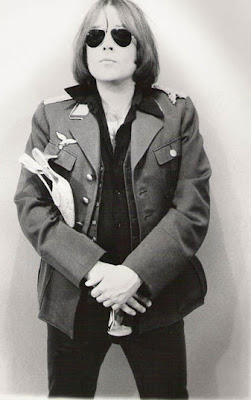 Ron Asheton died at New Year’s (Eve or Day they think) of an apparent heart attack. His body wasn’t discovered for several days, and so the news broke on Tuesday the 6th. It’s a sad and unexpected end for one of the world’s greatest rock guitarists. Without Ron, the Stooges are over too. I’m finding it hard to capture the enormity of all this. For those who don’t know or care about the Stooges or rock’n’roll, it probably doesn’t matter. For those who know, I guess they know.

While Iggy Pop’s vocals, lyrics, and personality were the focal point of the Stooges, Ron’s guitar playing was both amazingly intense and amazingly beautiful, and really defined the band’s sound. While even now some critics and obituary writers are calling him “rudimentary,” Ron was actually one of the most advanced players I can think of. Of course, rock’n’roll is supposed to be basic, and the Stooges’ song structures are basic. But on top of this primal simplicity — two or three chords — an approach brilliant in itself — Ron produced some of the most amazing sounds ever to grace vinyl and later cd.

All of the three original Stooges albums are great, but Fun House is the greatest album of all time, ever. I mean that. And much of this is down to Ron’s mind-blowing guitar work. His sound on Fun House is expansive, gritty, metallic (by which I don’t really mean “metal,” but like the real sound of metal guitar strings heard through loud amplifiers), and in places approaches free jazz in the spirit of later John Coltrane or Archie Shepp (though obviously completely different at the same time). As tremendous as the first album The Stooges was, Ron evolved so far beyond it for Fun House, in the space of just a year (1969 to 1970), that it’s hard to comprehend. But right now I’d rather put the record on, instead of trying to describe in words what is so much better in music. 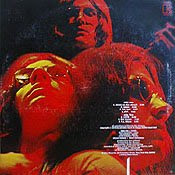 I met Ron in 1992 at an in-store appearance at Aron’s Records in Hollywood. Only a handful of people showed up, so I had the chance to talk to him for a while. He was extremely forthcoming, personable, and generally a real nice guy. At that time the Stooges had been long over, and the chances of a reunion seemed slim, though you got the feeling that he was always holding out hope. His show that night was fantastic.

More recently, the Stooges finally did re-form, and aside from the shows and the music itself, I was glad that Ron had the chance to continue on with what was clearly the most important thing in his life (I base this mostly on things I’ve read and heard, not simply on my relatively short meeting with him). More recent in-store appearances had a better turnout, to say the least. I guess people have started to catch up with the Stooges, which is good for them, but at the same time a bit odd since I’m used to nobody really knowing what I’m talking about when I say they’re my favorite band. While I was ambivalent about their new album The Weirdness (some songs good, some so-so), I was hoping that they would continue to record further and even better albums. I was just thinking about it the other day. But that will not happen now. 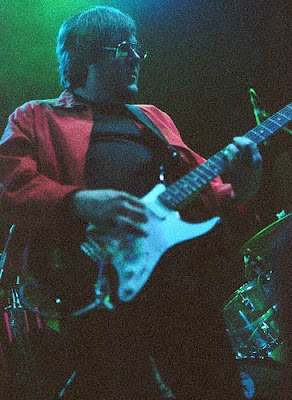 Posted by Mike Begnal at 2:42 AM No comments: 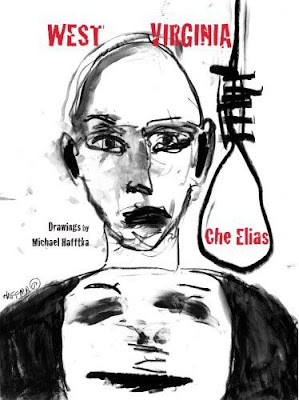 Che Elias’ newest book, West Virginia (Six Gallery Press, 2008), is, like many of his others, a story about abuse. But what makes it good is that Elias is not trying to reclaim some lost sense of normality or wholeness; it is not some stereotypical journey of “survival” designed to touch the hearts of book club readers. I say this because there is often a stereotype of what a book about “surviving abuse” entails. This book, however, entails experimental prose and an extreme, almost primitive, sense of avant-garde art.

One could make an analogy here with the historical avant-garde and the birth of Modernism. After the First World War traumatized Europe and destroyed any conception of the old order, a literary movement like Dadaism made perfect (non)sense. A return to the poetry of the past would have been ridiculous. So it is with Elias: despite it all he will fearlessly face forward even as he faces his past, eschewing any return to innocence. Elias’ reaction to “another kind of nihilism...all the men making love to the boys, and the men now, I guess they are all fascists, and the men all love to fuck these other young men, and the men who came in our asses, the dogs now running out from the bush...” — his reaction to all this which is embodied by the state of West Virginia where he is from (a previous Elias novel is titled Wheeling) is to live life in the subsequently cracked state, albeit in a different geographic state (Elias is now a leading figure in Pittsburgh’s underground literary scene).

Elias’ prose in West Virginia, though, is perhaps his most readable yet. It is often dense and circular, with at times an almost shamanic sense of repetition, but it remains open to the reader who is willing to sink into it. West Virginia is perfectly described as “all gun shops and places to have your nails done correctly too....” And the “room” where most of the action takes place, the room which is witness to the horror, becomes personified almost as an entity unto itself: “...and we did not see the people who oppressed us, and the room said oh, wait, here’s one more burn across you, and here’s one more blade to slice you into, and the room said well, wait, we’re going to slice you into what?” The room too reinforces the sense of uncertainty in the wake of incomprehensible terror: “...and the room once asked us if we’re really going to know what they have got in store for us and the room now, a lot of the room made to look cold and the place made to look bad as well.”

This is the human condition, which really any feeling person can recognize. We may not all have undergone the intense abuse described in West Virginia, but unless we live in a mansion or la-la land, we have all been oppressed in some way or another at some point. In any case, a good novel or poem does not require that one can “relate” to it (though one may or may not), but that it springs to and marks out its existence in an original way. The way in here is not solely through the book’s content, but through Elias’ writing itself, his text which is starkly brilliant, often poetic, intense as the experience it describes, and singularly original. There is no one else writing who is like him, and that of course is a true hallmark of great art.

Posted by Mike Begnal at 3:14 PM No comments: