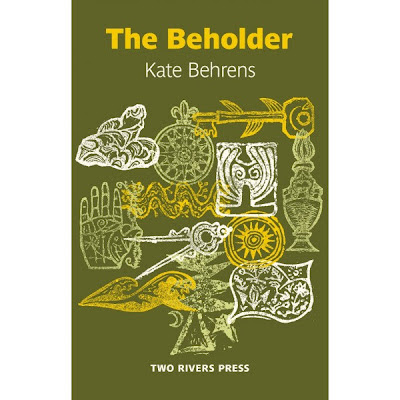 My review of Kate Behrens’s collection The Beholder (Two Rivers Press, 2012) appears on the Eyewear site (link to review here). Behrens is a British poet who I had not heard of before.  Maybe the name sounded familiar, but that is it (and I think I am imagining even that).  I was happy to read something so good when I wasn’t really expecting to.  In the review, I kind of react to the description of the book given in some of its back cover material, versus how the book actually read to me.  I guess I could have ended up writing more about cover blurbs in general, or done some analysis of them, but that is perhaps an essay for another time.
Posted by Mike Begnal at 4:49 PM 2 comments:

Though I don’t have any work in it myself this time around, the new issue of the online journal The Burning Bush 2 includes a poem by David Stone dedicated to me. My regards to Stone. The poem, titled “My Ancestral Memory,” has to be a reference to Ancestor Worship. The whole issue (number 3), edited by Alan Jude Moore, is well worth checking out and can be read starting here.
Posted by Mike Begnal at 6:47 PM No comments: 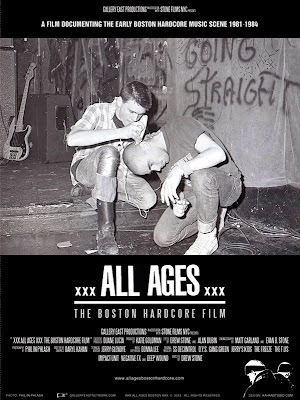 There are a number of possible approaches to historicizing something that happened within living memory, and director Stone has chosen the “talking head” model, letting the people who were there reminisce or discuss at will.  Interviewer questions are rarely heard and the subjects are rarely challenged.  There is no narrator.  This makes for a grassroots vibe that in a way reflects the original context itself, a completely underground, self-created scene that was built from the ground up, a truly alternative community that did not rely on any kind of “official” support or affirmation (except on the odd time when an established club would book a hardcore show — though, as the film points out, the ensuing chaos usually meant that it was also the last time).  The problem, at least for me (and this review, if it’s even a review, is admittedly a completely subjective take), is that there is something of a lack of critical perspective.  Certainly, Stone does his best to steer the interviewees down particular avenues of self-criticism, as when Springa confesses the moment when he knew that SSD had gotten lame. (The trajectory of the film inevitably follows that of American Hardcore, since the trajectory is what really happened.  Here also, then, the turn toward heavy metal is depicted as retrospectively comedic, with some hilarious footage of SSD’s final show in LA and Springa trying to be David Lee Roth or something.)

John Sox briefly talks about how some people didn’t get The F.U.s because they supposedly didn’t have the same sense of humor as them, and so they often reacted badly to things they said.  In the absence of follow-up questions, however, one wonders if Sox means that they were just kidding about their politics and never meant any of their right-wing sentiments, that it was all merely a joke.  Or were they at least semi-serious about it?  I didn’t take the F.U.’s lyrics wholly as a joke at the time, though obviously they were reacting to left-wing political punks and the whole Maximum Rock’n’Roll thing.  Maybe they were kidding all through their career, but this uninterrogated Sox segment renders the story unclear.  Of course, the film assumes some knowledge on the part of the viewer, and perhaps it seeks to reproduce the ambiguity that The F.U.’s themselves put forward at the time.  Still, isn’t a documentary’s role to fill in the gaps?

And then there is the issue of gender politics in the Boston scene.  What a hornet’s nest.  A couple of people, men, discuss how they basically purposely attacked girls who would try to slam in the pit.  Why?  Jake Phelps describes his fuck-you, antisocial attitude, but doesn’t come off as any more enlightening on this today than he would’ve been as a teenage thrasher. A couple of women react to the situation, but only for a few seconds of screen time, as if the included response were merely obligatory.  There’s obviously a lot more to say here.  Sure, the physicality of the pit means there was inherently going to be some degree of biological hierarchy, but why the need to be so overt and extreme about it, to actually specifically push women out?  Christine McCarthy suggests that most or many of the guys in the scene were afraid of girls and weren’t getting laid — so what was going on?  I don’t really care about these guys’ sex lives, to be honest, but the film itself brings it up, only to leave it simply hanging out there with no real explanation.  Why the need to be so anti-female?  Basic psychology suggests some deeper issues, but no one ventures a guess, and most of the principals are not asked. (The closest we get is as the credits roll, there’s a brief snippet of Choke saying that he never hit on girls at the time because “I respected them too much.”)

For that matter, I’ve always wanted to know why the Boston scene on the broader level was so militant about everything to begin with.  For example, why did these kids latch on to straight edge in such an intense way?  Jon Anastas talks about the anti-drug thing as being a reaction against hippie parents, but I thought guys like Al Barile and Choke were more from old-school working-class backgrounds (maybe I’m wrong?).  In American Hardcore, Chris Doherty mentions that a lot of kids in the scene were from broken homes, but there’s no background stuff like that here.  Don’t get me wrong, this is still an important and worthwhile film, but I thought it could have gone deeper into what drove these people and why Boston was in retrospect such the strange and unique scene that it was.  So for me, as much as I enjoyed it, there was perhaps of a bit too much unquestioned nostalgia and not enough analysis.  This was clearly a conscious directorial choice, however, and so Stone’s work excels within the parameters he has set for himself. (more below this photo of SSD....)