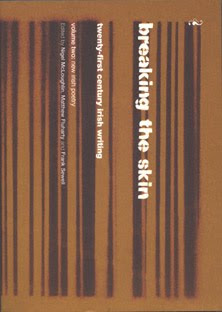 In 2002, the Irish publisher Black Mountain Press (of Ballyclare, Co. Antrim) released an anthology of poetry titled Breaking the Skin: 21st Century Irish Writing, Volume Two: New Irish Poetry (ISBN 0-9537570-2-1). (The first volume collected new Irish fiction.) The editors (Nigel McLoughlin, Matthew Fluharty, and Frankie Sewell) arranged and listed the selected poets according to age, except for the Irish-language contributors who were placed in a separate section at the back of the book (for understandable if debatable reasons). The list of those included in the anthology, ranging in birth-date from1957-75, reads like this:

It is an impressive list by any standard (I consider my own inclusion a lucky break). Virtually all of the contributors have since gone on to publish collections, or further collections, of their own (the standard for inclusion was that the poets being included must not have published more than one full collection at the time), and some, such as Mac Lochlainn, Higgins, French, O’Reilly, O’Mahony, and others, have achieved what could be called a degree of fame (such as it is in poetry).

Yet, in recent discussions of Irish poetry, I don’t think I’ve heard Breaking the Skin so much as mentioned. While it received a certain amount of fanfare upon its publication (there were launches in every major Irish city, North and South, and reviews of the book in many local publications and smaller national journals), it somehow failed to get a review in Poetry Ireland Review, Ireland’s journal of record. And I’ve often wondered why it seems so disremembered now, only eight years after it came out, containing as it does so many people who are active and significant to this day. The publisher, while now defunct, was quite respected in its heyday a handful of years ago, publishing The Black Mountain Review along with a number of noteworthy poetry collections. The editors as far as I remember were never on anyone’s bad side (an unavoidable question in the politics of Irish poetry, as in many other scenes I suppose), and did an admirable job within the parameters they set themselves (“a selection of poets Irish by birth or citizenship under 45 who have published one book or who have one collection forthcoming [as of the 2002 publication date],” per Fluharty’s introduction).

I think part of the reason is that anthologies don’t seem to play the same central role they do in for example American poetry, which is often temporarily shaped or at least influenced by a major, seminal anthology (I’m thinking of, say, Don Allen’s The New American Poetry, 1960). Irish poetry doesn’t really seem to like the idea of “new generations” of poets in the same way that America does. To take another recent example, in 2004 the larger, British publisher Bloodaxe Books released an anthology titled The New Irish Poets (ed. Selina Guinness), and while it seemed to want to do something very similar to what Breaking the Skin had just done before it (to the understandably raised eyebrows of some involved with Black Mountain Press), it too now seems to have sunk without much of a trace. (However, the Bloodaxe book does have the benefit of better distribution and a publisher that is still in existence, so who knows, it might actually have the better chance of being revived by future critics.)

Another reason why Breaking the Skin may have been unduly ignored up till now has to do with questions of what could be called the “style wars” in Irish poetry. Though in most instances the book doesn’t push an agenda of radical poetics per se — which has often been part of the discussion in recent Irish poetry, “experimental” versus “mainstream” — it does nonetheless postulate a new generation of Irish poets that is “formally free.” According to McLoughlin in his preface, “influence has been absorbed to the same degree inwards, these are a diasporic generation who have, or currently do, live in Asia, Europe, Africa, Australia and America. They bring with them and attempt relation to, and study of, their sense of Irishness... They are intrinsically demanding, formally free, taking their inspiration where they find it without apology... The old ideological division between the North and the South [of Ireland] has all but disappeared... These are poets of the world and world poets, but all are unmistakeably Irish — the tradition burns through their work no less brightly for being added to by American, English and European influences.”

It is maybe the blurring of categories, more so than any partisan position in relation to style or poetic ideology (again, there is little in the book that could be seen as overtly avant-garde), that nonplussed some at the time. While it’s a cliché to say this, it’s a cliché that is based in truth, that Ireland is a very tribal society, and so Irish poetry reflecting this in some ways was content to keep the usual divisions going. In fact, in retrospect, the “experimental” versus “mainstream” debate was an easy debate, one that a lot of people were easily willing to embrace, because the Irish poetry world is used to dichotomies. Less immediately understandable is an argument that says this “generation” is distinguished not by one singular radical departure in style, but by the fact that it encompasses a multiplicity within itself in the same time and place(s), and is willing to interrogate preexisting conceptions of Irish identity.

Of course, this presupposes that preceding generations of Irish poets were in some way homogeneous. Actually, I don’t think that’s completely true. While, for example, it is said that post-Independence Irish poets fulfilled a role as bards of the tribe, similarly to the filí of the old Gaelic Order (†1601), no self-respecting 20th-century Western poet, even an Irish one, would fully abrogate the individual responsibility to oneself as an artist and to his or her medium. But it is all about perception, and to exist within perceived established categories and structures is often easier than engaging in a world in which everything is blurred, and the structures one has grown up with are undermined and sometimes seemingly even cast to the wind. To return to my reference to the Gaelic Order, which perished in the onslaught that was English colonialism, sometimes change occurs as the result of such oppression and violence, and is therefore a negative thing that needs to be opposed with equal force if possible (Hugh O’Neill, Tyrell, and others). But sometimes, in other contexts, change is natural and part of evolution and a good thing, which doesn’t threaten individual or national identity (indeed encompasses all on a hopefully equal and distinct [rather than homogenizing] level), and should be embraced by progressive living people. While I admit I am putting this in more grandiose terms than is perhaps called for here, the world-view expressed in the constructive impulses behind the Breaking the Skin anthology, and in most of the poetry itself, is in the latter category. (I realize I’m creating another dichotomy here: change that is bad and change that is good.)

In any case, for many anyway, this other world-view is merely our contemporary reality. And therefore as critics and scholars and poets look at the recent history of Irish poetry, especially now that the economic boom years of the “Celtic Tiger” have been swallowed up in the global bust and everyone wonders what just happened, it is not outside the realm of possibility that Breaking the Skin will once again enter the conversation somehow. Much of the work in this anthology was created in the context of the Irish boom economy, with all the attendant change (good and bad) it entailed, even if not all of the poems overtly gesture toward this. If anyone wonders where were the poets in all this, and from whence came certain Irish poets of the now, many of them are in Breaking the Skin. It is a book whose day may yet come.

(Interested parties could try to track it down at Amazon.com or AbeBooks.com. An interesting review appears here.)
Posted by Mike Begnal at 2:27 AM 1 comment: 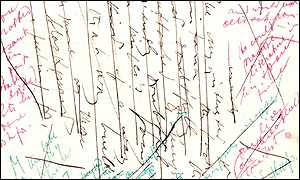 I am included in a series of interviews on the subject of James Joyce’s novel Finnegans Wake, originally published in the Abiko Annual with James Joyce Finnegans Wake Studies 21 (2001). The interviews were conducted by the journal’s editor, Dr. Tatsuo Hamada. (The issue also included a critical essay of mine titled “The Wake Will Be Televised,” on Joyce’s engagement with the medium of television in FW.)

Hamada asked a number of notable Joyceans (and some less notable, like myself) a series of questions:

Can we read through FW?
Can we understand FW?
How can we best read FW?
Is there a plot in FW?
What are the riddles or enigmas of FW?
Are there too many sexual matters in FW?
What did Joyce want to communicate in FW?
Why did Joyce invent tough, mighty words in FW?
Did Lucia’s illness affect FW?
What techniques are to be learned from FW?
Is FW translatable?
How do we evaluate our reading of FW?

Follow-up questions were then tailored to particular responses. The results make for some very engaging reading, at least if you have an interest in Finnegans Wake, in Joyce, or in modernist or experimental literature in general. Among other certainly more important things, I was struck by the number (well, a handful) of respondents who admitted to not having read the Wake in its entirety. Clearly it’s a daunting proposition, but is it not still just words on the page, like any book? (albeit 628 pages of often difficult-to-understand words). Well, a commitment such as that is a matter of priorities, of course.

You can go to my interview directly here, and the full list of interviewees (which also includes my father, who was a notable Joyce scholar) is here. Click on the individual names, which are links, to read the others.

Posted by Mike Begnal at 4:40 PM No comments: